As a canal village established because of the construction of the Ohio & Erie Canal, Canal Fulton honors the past through ongoing preservation of the canal’s history.

“Honoring our past and building our future” is Canal Fulton’s town motto. As a canal village established because of the construction of the Ohio & Erie Canal, Canal Fulton realizes their town motto through ongoing preservation of the canal’s history. Keep reading to learn about the history of the town, and how they honor that story today.

The Founding of Canal Fulton

The village of Milan, which would later merge with Canal Fulton, was established in 1814 making it the first settlement west of the Tuscarawas River. Milan continued to be the only village in the township until German and Irish immigrants helped build the Ohio & Erie Canal in the mid-1820s. Following the canal’s construction, numerous villages popped up along the canal. In 1853, three neighboring villages merged: Canal Fulton, West Fulton, and Milan. This ended the commercial competition between the three villages. The new town retained the name Canal Fulton because of the canal’s importance and to pay homage to local pioneer Ben Fulton.

Canal Fulton was home to several industries that relied on the Ohio & Erie Canal for the transportation of their goods. In the mid-1800s to late-1800s, the city was home to numerous granaries, warehouses, and gristmills that took advantage of the commercial waterway. Canal Fulton was best known as a center for grain distribution, but it was equally well known that in Canal Fulton, every lock had at least one saloon. The Babst Tavern (later the City Hotel) was the most popular tavern in Canal Fulton. 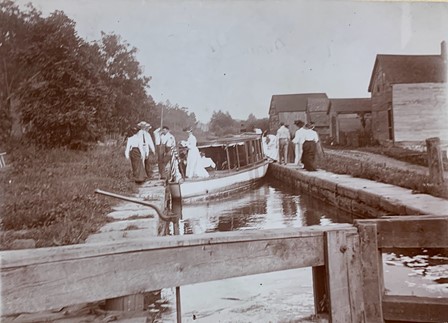 Just like in this photo taken along the Ohio & Erie Canal in the 1890s, visitors to Canal Fulton can spend a day of leisure on a replica canal boat. Credit Line: Courtesy of Western Reserve Historical Society, Ohio Views Photograph Collection, ca. 1890s

While the canal was vital to local commerce in the 19th century, canal dependence changed over time. By the 1860s, the economy in Canal Fulton was changing because coal was discovered west of the city, and Canal Fulton became known for its coal industry. The coal industry was a magnet for Scottish, English, Irish, and German immigrants in the 1860s to early-1900s, helping the town grow. By 1905, the coal business began dropping in popularity, leading to less demand for shipments along the canal. In 1913, the Great Flood ended the Ohio & Erie Canal’s use as a commercial waterway, and the last commercial canal boat bobbed along the water in Canal Fulton.

Today, Canal Fulton is home to a portion of the Ohio & Erie Canal Towpath Trail where recreation seekers can ride bicycles, hike, ride horses, bird watch, or go for a walk along the water. The historic Towpath Trail was not always a recreational trail because it was originally used by horses and mules who towed canal boats filled to the brim with various goods and passengers. Although the use of the trail has changed, the name of the Towpath Trail still resembles its utilitarian origin.

Canal Fulton is also home to interpretive facilities that any history lover will enjoy, including the Canal Fulton Old Days Museum and Heritage House, as well as the Spring Hill Historic House Museum. One of the most popular historical attractions in Canal Fulton are the St. Helena boats. In the late 1960s, Engineer Carroll Gantz studied old photographs and construction plans of old canal boats to determine the boats’ exact measurements. While conducting her research, she also came across a scale model of a canal boat created in 1933 called St. Helena. Craftsman William McLaughlin based his scale model design after a boat named St. Helena, whose measurements had previously been registered in Newark in the late 1800s. 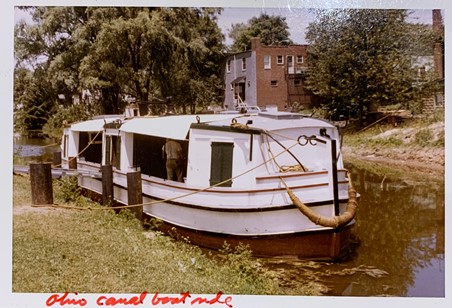 The St. Helena II was a reconstructed canal boat that took tourists along the Ohio & Erie Canal in Canal Fulton in the 1970s and 1980s. Today, the St. Helena III welcomes passengers to bob along the water like those who enjoyed the canal’s heyday. Credit Line: Courtesy of Western Reserve Historical Society, Ohio Views Photograph Collection, 1972.

Using the measurements from the photographs, construction plans, and McLaughlin’s replica boat, Gantz devised a plan for replicating an old canal boat. Due to the bulk of the design being based on St. Helena, the first replica boat completed in 1970 and subsequent replica boats have continued to be named St. Helena. Today, the St. Helena boats offer rides from the village center to Lock 4. This is the only location to ride in traditional canal boat fashion in the Ohio & Erie Canalway National Heritage Area.