Remembering the Ohio & Erie Canal as a Commercial Waterway

How the 1913 Flood Retired the Canal

The Ohio & Erie Canal was  a major driver of Ohio’s economy in the early 19th century and early 20th century due to the canal allowing the easy transport of goods. The Ohio & Erie Canal served as a commercial waterway for nearly one hundred years until a catastrophic flood labeled “Ohio’s greatest weather disaster” ended the canal’s heyday. When the 1913 flood struck Ohio and its neighboring states, it caused hundreds of deaths, swept away thousands of businesses and homes, and ended the canal’s use as an important commercial waterway.

Prior to the Great Flood

Prior to the infamous 1913 flood, the Ohio & Erie Canal flooded several times in the 1880s and 1890, which led to portions of the canal being rebuilt early in the 20th century. During this time, Ohio businesses and industries started to rely more on railroads to transport goods. Most businesses did not shift their mode of transportation back to the Ohio & Erie Canal after the repairs were made; instead, many continued to utilize trains. Therefore, when the Great Flood hit in 1913, the canal ceased to be used for transportation altogether. 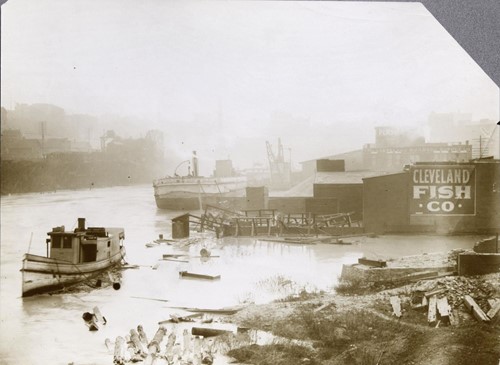 This image of the flood was from where the Lower W. 3rd Bridge was. Photo Credit: Cleveland Public Library/Photograph Collection, 1913.

In January and February of 1913, Ohio saw a great deal of snowfall across the entire state. This alone didn’t spell disaster for the state, but in early March the snow thawed very early in the season. Additionally, it began to rain on Easter Sunday, March 23, and did not cease for four days. In these four days, the state of Ohio received a torrential downpour equivalent to about two to three months of rain. The Cuyahoga, Muskingum, Scioto, and Licking Rivers all experienced record flooding, which contributed to canal flooding. The excessive amount of snow, early thaw, and pouring rain contributed to one of the worst weather disasters on record in Ohio. 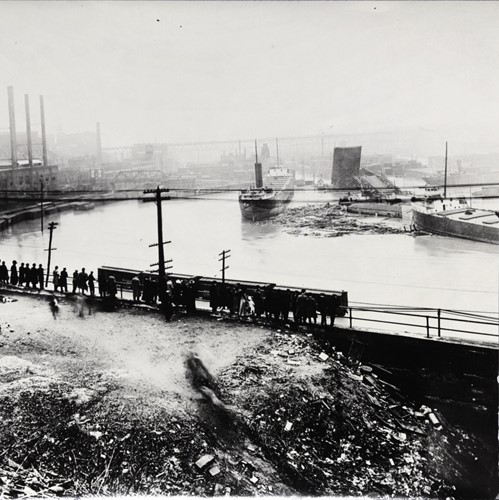 The Cuyahoga River went over the bank leading to massive flooding at the corner of Ontario and Huron Street. Photo Credit: Cleveland Public Library/Photograph Collection, 1913.

Thousands of Ohioans in flooded areas were left homeless and without employment. Although cities coordinated and slowly rebuilt communities along the Ohio & Erie Canal, the plan for the canal itself was not so black and white. Some argued canal usage should be discontinued and parts of the canal should be sold off. Some believed the canal should be repaired and used in a different way, such as for hydropower or be utilized by the ever-expanding railroad. It was ultimately decided that the canal should be retired as a commercial artery. Some portions of the canal were simply abandoned, and other portions were sold off to commercial industries, including numerous railroads.

Today, walkers, hikers, and bicyclists can be found enjoying the almost 100 miles of the Ohio & Erie Canal Towpath Trail that was once traversed by mules and horses pulling boats along the canal.Where the Canal or the Towpath are no longer accessible, alternate routes connect communities along the corridor.  Pieces of the canal have been restored throughout the National Heritage Area, including a working canal lock at Cuyahoga Valley National Park’s Canal Exploration Center. 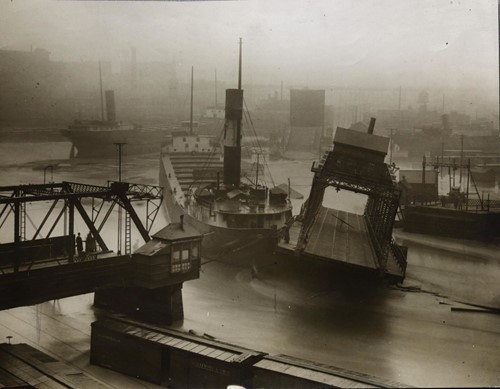 The 1913 Flood at the mouth of the Cuyahoga River made the steamer William H. Mack break away from its moorings leading to it crashing into a bridge. Photo credit: Cleveland Public Library/Photograph Collection, 1913.

Committee on Rivers and Harbors, and War Department. Report, Prevention of Damage of Floods §. 914 (1914).